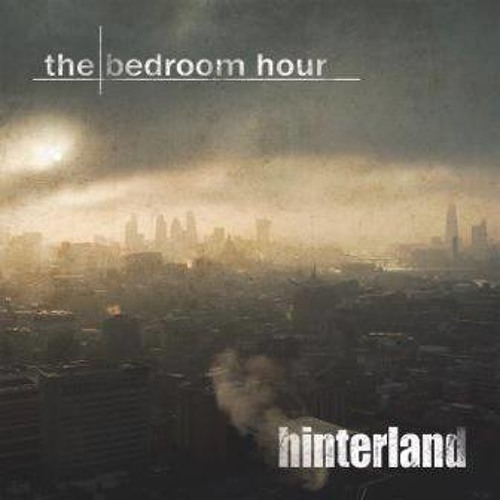 West London five piece The Bedroom Hour have recently released their debut album ‘Hinterland’ after spending the past few years building up a fanbase for themselves through live shows, EP releases and social media. Described by BBC Introducing’s Gary Crowley as “epic, big sounding, widescreen, pop-rock”, it does seem that this album is set to be a wonderful one to check out.

Hazy, elongated synths open the album giving a feeling of calm much like the sound of the ocean after which the track is named. Guitar plucks oscillate while high pitched and drawn out vocals flow alongside adding more depth to the synth sounds. Atmospheric synths and guitar brings us into ‘Sea Without Water’ alongside softly padding drum and cymbals before calm, hushed vocals with a wonderful sense of harmony and tone running throughout come in. A calm track overall with a fast paced tempo, all the layers of sound perfectly complement each other to create a full soundscape with a slight nostalgic feel.

Ebbing and flowing melodies and dank, heavy sounds open ‘Nocturnal’ before fast drums and echoing synths arrive backing up the vocals giving an upbeat sound without needing to resort to catchy hooks or pounding drums. While a constant kick drum and twanging guitar strings bring us into longest track so far ‘Heart Will Haunt’ while vocals are hushed and sound like they are coming to us from afar. Emotion is portrayed throughout them telling a tale of tragic love with lyrics such as “your heart will haunt you” and “and I have had enough of all these falls, they won’t let me go”.

The whole album sounds very dreamlike with that slightly hazy edge to all the tracks, they sound huge and grand and perfectly capture your attention with great sounds and storytelling lyrics. Tracks such as ‘Broken’ provide a more threatening tone with fast, deep bass and drums, air horn style synth that echoes around the track and much more prominent vocals leading to a rock fuelled chorus of guitar riffs, pounding drums and jumping violin moments. Whereas ‘Sapphires’ is full of atmospheric notes that glisten throughout like a gem catching the light with an echoey guitar and drawn out vocals set against a classic piano line that demands your attention.

‘Ghost of a Smile’ has a grand air about it with big vocals full of emotion sat upon a quick upbeat piano and hard hit drums making this a poignant moment on the album. However, ‘WW/Me’ has a more alternative and catchy vibe, starting with sparkly synths and faint vocals it builds through a riff to distorted lyrics and a guitar line that echoes around your ears when you listen to this on your headphones creating a rhythm guaranteed to make you dance.

Influences of The Horrors run rife throughout ‘I See Suns’ with nostalgic and hazy attributes from the plucked guitar strings, drawn out voice, retro synths and a deep dirty bass line that adds some rock grit while title track ‘Hinterland’ is a short interlude of disjointed and muffled noises. This takes us into the epic finale of ‘A Map Made From My Bones’ with ambient synths, a great bass, nostalgia laden twinkling guitar and a voice that mixes big notes and that great tone in the gentler moments of the verses keeping the momentum alive against the grand sounds of crashing cymbals and high pitched synths that rebound around the track before fading to silence.

This debut is a very coherent and wonderful piece of work from the off, the whole things flows and merges into one another perfectly. The tracks are all huge soundscape pieces in their own right but when put together on the album it creates something that really is great to listen to and will command your attention for the 40 minutes of its play time.

Check out the single ‘Ocean’ below: